Here is my list of books that I've read at least one book in the series. In the first section are books I recommend, with a caution (if it needs one) and a link (if I've reviewed it on Stroke of Genius).

1-3 grade (and beyond as interest remains)

A True Book series by Elaine Landau--these books are nonfiction, and her book about Israel was the best out of the bunch I borrowed from the library.

Boxcar Children--negative things are portrayed negatively; you might want to read first to discuss with your children later. (Link and link.)

Cam Jensen--She is in fifth grade, but the writing style is more geared to younger kids. I read the Mystery of the Stolen Diamonds and there were no negatives portrayed as positive (see Jigsaw Jones in "not recommended" section). There is also a Young Cam Jensen series, but I haven't read any of those yet.

Encyclopedia Brown--he's 12, and there is a bully, but he's taken care of in each story.

The Littles--nothing worrisome in these.

Magic Tree House--about half are good. I wouldn't suggest the titles with ghosts and wizards and etc. Use your good judgment there.

Magic School Bus--I read Penguin Puzzle and it is VERY similar to the Magic Tree House books, they just travel in a bus instead of a tree house! (And they are much "younger"--I think technically they are considered picture books, whereas Magic Tree House books are chapter books.) I would recommend any with "innocent" titles. Dinosaurs might have evolution, etc.

Too Smart Jones series by Gilbert Morris--well, this book was GOOD! I was a little hesitant at first, for several reasons. His books for adults are dry and boring (to me, anyway). Plus, the cover photo looked like the kids were in junior high, and the first book's title is "...And the Pool Party", so I went in skeptical. The inside art is just a step up from stick figures, and the main character is in 4th grade (her brother is in 3rd) so all their friends are elementary age. The pool party didn't have huge significance, only serving as the turning point when the main character stopped thinking about herself and started thinking of others. Also--it's about a group of homeschooled kids, so that was awesome!

Geronimo Stilton series--Not a Christian series, but clean and fun to read.

Lemonade War--Good part: encourages mathematical computations and economics. Bad part: the sibling rivalry is a huge part of the story and it seems to be "normal."

Cul-De-Sac Kids series--easy to read, Christian series. The author also has several adult Christian fiction, and I prefer her "grown up" style better than her "kid" style, but the books are moral and there are a lot of them, so if I were you, I'd definitely give it a good chance.

Little House on the Prairie--you can't get any more kid-friendly with these books.

Mandie--she's 12 and deals with teen problems, but not in a way that is inappropriate for 9 year olds.

Chronicles of Narnia--When I was a kid, I wasn't allowed to read them. I think because there are some super mild curse words. Also, Mr. Beaver drinks beer. I'm reading them aloud to EJ, so I just skip the bad words. (And I HIGHLY recommend you read them in written order. My reason: In the Lion, Witch, and Wardrobe, when you are first introduced to Aslan, Lewis tells you that the kids don't know who he is any more than you [the reader] do. If you read them out of order, you will know, and it will ruin some good expectation. Same goes for a lot of stuff you learn about in the LWW.)

Obi--good story, bad language throughout. I suggest reading first with a marker if you happen to buy it at a thrift store.

Christian Heroes: Then and Now--missionary stories, written in a way that will capture the imagination and set you on the edge of your seat. EJ has 5, and they are so good, I wrote/am writing study guides to go along with them.

Trailblazer Series--last year when EJ was in 3rd grade, he was NOT interested in these books. This year, he's eating them up. It's amazing what a difference one year makes! These are missionary books also, set in historical fiction novel form.

The Mistmantle Chronicles--good story about woodland animals fighting to keep their kingdom, slightly spiritual, but nothing to really challenge your faith.

The Spirit Flyer Series by John Bibee--not sure if this should fit here or in the 7-9 grade category. It's a step up from Chronicles of Narnia, but not nearly as deep as Frank Peretti's adult books. It's written more like Narnia, with "Magic" and Lucifer is "Treason" and angels are "Aggeloi" and so forth. But it's not like Narnia with happy talking fauns and beavers drinking beer. I highly recommend it as an allegory--just read it first to see if it's appropriate for a younger child.

Passages an Adventures in Odessy series--Siblings fall through a hole in an old house and end up in King Saul's day. They each have  "gifts"--the brother constantly saves David's life, and the sister can see the future. While there is definitely a supernatural tone, the book portrays it more as regular ol' miracles that of course God does all the time. It makes you think about the Bible story from a different angle.

The Mysterious Benedict Society series--I cannot recommend this series enough! EJ and I both ate them up! The story is about three kids who have no parental figure, risking their lives to be spies so they can save the world. There is no bad language, no questionable morals, and some hilarious twists and surprises. (My favorite surprise in the first book came at the very end--I'm talking, last couple of pages. It was so worth it!) There is also a prequel about Mr. Benedict when he was a kid, and "he" wrote a book of puzzles for his society kids.

Club CSI series--cute little book about a group of friends who put their newly-acquired investigative skills to good use to trace a recent outbreak of food poisoning in their school. This series might be better in the 1-3 grade section.

Punished!--I think this is a stand-alone book. It's short and sweet, with just enough mystery and suspense to keep a young child's attention without being scary or traumatic. Maybe a little magic, but not even as much as Magic School Bus or Magic Tree House. Also, after EJ read this book, he talked about different literary devices for a month.

The Railway Children--This book is amazing! Three siblings experience a change in their station in life and go from "upper-middle class to just this side of poverty". The book follows their fantastic adventures, making friends and saving lives along the railway close to their home in the country. The author speaks to the reader throughout the book, making the closing page (in the last chapter aptly titled "The End") very poignant. Recommended age would be advanced 5th grade to remedial 8th. Although I read it at age 33 and I was enraptured with it.

Ladd Family Adventures by Lee Roddy--This series is a good, intense, Christian series. The 12 year old gets into life-threatening trouble but the book is very clear that what he did was wrong and he gets punished.

Historical Fiction Adventures by Bonnie Pryer--I read "Hannah Pritchard" and I will wait until EJ is 12 or 13 for him to read it. Nothing really wrong, but some grown-up themes he is not ready for at 7 years old!

Chu Ju's House (and other historical fiction books of that nature by Gloria Whelan)--This book is about a 14 year old girl in ancient China who runs away from home to save her baby sister from being sold to the orphanage. It will make you think. It will make you grateful for what you have. It will cause you to shake your head in horror and wonder that such things actually took place in real life. It will stay with you for days after you read it. Whelan writes historical fiction in a sneaky way, where you don't even realize you are learning about history.

The Missing series by Haddix--This is a great sci-fi adventure series of 5 books. One crass word and two "substitution" bad words, and several benign references to the Bible and church. Book 1 ends on sort of a cliffhanger, so make sure you have all five books before you start the first one! I would let any semi-mature 10 year old read these. The kids keep important things from their parents, and before giving EJ the first book, I warned him that he is not to be like the kids in the book--he is to tell us about everything going on in his life!

Urban Outlaws series by Peter Jay Black--Lots of technical stuff in here about computers and coding. Most of it is explained. I read the first book (out of 5). The main character is said to swear and curse a lot, although it doesn't actually say what he said. I do like that they reached out to a grown-up for help, even though the kids are still the ones to "save the day" (although the book ends on a definite cliff-hanger!). I didn't like it that the kids, especially the main character, seemed a little disrespectful to the adults. I get that they are 12-15 years old, and I get that they've been on their own, taking care of themselves for some time now, but that doesn't excuse them for their abruptness, especially since this is set in England and aren't the English known for their politeness? I found it a 3/5, although if I were someone like EJ, I'd probably rate it 4.5/5.

The League of Beastly Dreadfuls--Please don't waste your time even picking this book up off the shelf. I should really write a full-blown review of it, but until I do, suffice it to say that this book goes so far beyond crude as to border on vile. It's like a handful of teenage boys got together and thought up the most debased way of saying normal things. Which really disappointed me, because it's a 320 page book about an eleven year old who solves a mystery.

National Espionage, Rescue, and Defense Society--I don't remember what exactly was wrong (since we checked out this book four months ago and I'm just now getting around to writing this) but I think there was extensive bad language.

Magic Shop Books--The magic in these books is a little demonically supernatural. I read the first several chapters of a couple different Magic Shop Books, and they all made me uncomfortable, and definitely not something I'd want my impressionable child reading.

Marvelous World series--(another book from four months ago) but I think this one felt demonic also.

Wonder by R.J. Palacio--I absolutely hate putting this book in this category. It's a wonderful story about a ten year old boy who goes to a traditional school for the first time, and the book is divided into 8 sections, each section told in first person by a different character of the story. However! The author comes across as anti-homeschool in several different ways, which is a big turn-off for me right away. There is liberal cursing, swearing, and general taking of the name of the Lord in vain throughout the entire book. And there is a heavy blanket of humanism drenched in every chapter. Earth to R.J. Palacio--life is not about me. Life is not about you. Life is about Jesus Christ! I wish a Christian author had written this book--it would have gotten 5 stars and been placed in the "definitely read" column for 4-6 grades. As it was, I only finished it so I wouldn't write a review about a book I didn't read all the way. 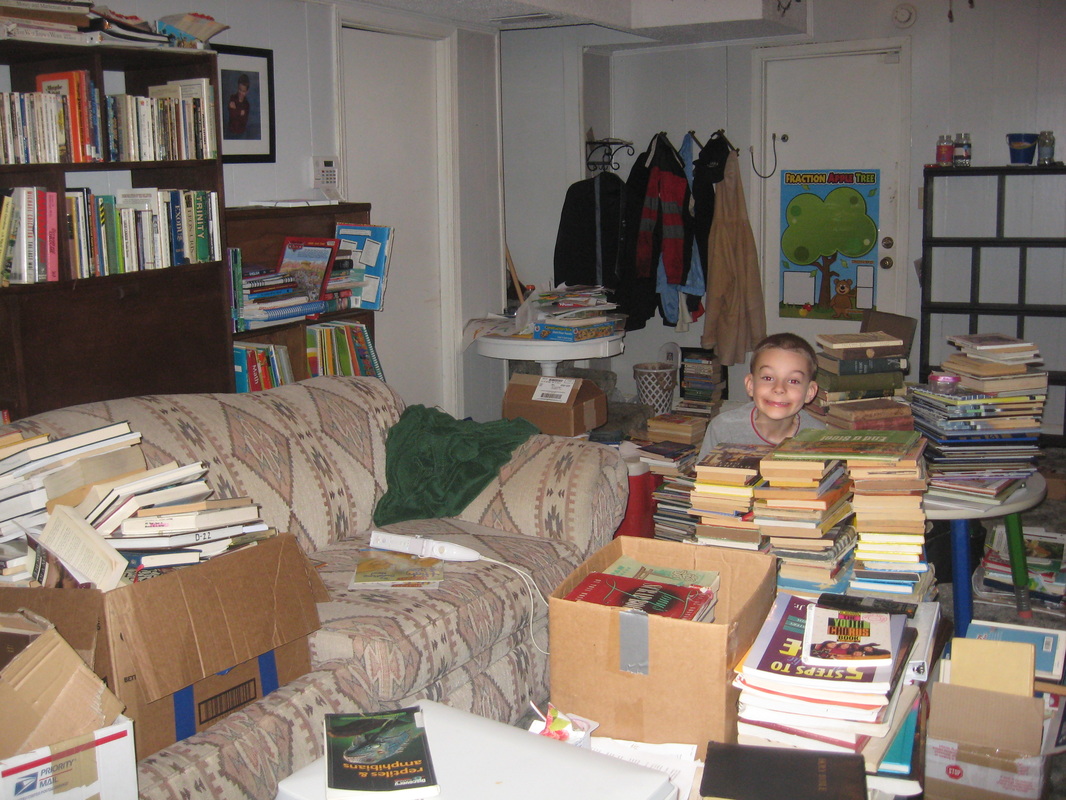